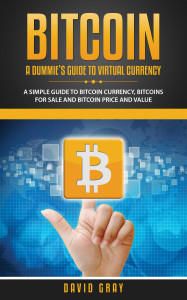 BITCOIN: A Dummie’s Guide to Virtual Currency, Author David Gray simply discusses the merits and risks of bitcoins, explains how to buy, sell and use bitcoins and how to create a bitcoin wallet. Bitcoin is a digital currency that can appear very complex. It’s a person-to-person monetary system that was introduced a few years ago as an alternative to standard monetary systems. Since its inception it has been heralded as the alternative to fiat currency (government-declared legal tender), which has a long history of failure. Not surprisingly, many people want to understand more about bitcoins. Most of the information available is confusing and complicated, though using bitcoins is relatively easy. Once purchased or mined, bitcoins are easy to spend. Today, more and more brick and mortar small businesses and online stores are accepting bitcoins and larger corporations, such as overstock.com, are ready to jump on the bandwagon. They cite the advantage of no fees to accept bitcoin and the fact that they can attract buyers who like the untraceable aspect of the currency.