Battle For Magic: The Power Within 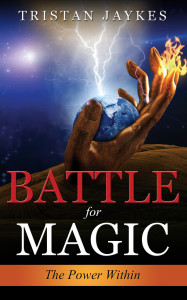 The Power Within (Book 4) – The people of Anglozia are about to lose their magic and they don’t even know it. Only Tobias, newly awakened to his magical powers, and Tor, the quiet but charismatic elf, can save them, yet neither knows that the other is still alive. Meanwhile, the beautiful one-eyed Elistra is losing her mind – literally. As the evil Awakened Ones cast their mind-cleansing spell across the land, will Elistra even remember her love for Tobias? After his escape from the evil Awakened Ones, Tobias, the former Tratfort City guard, is now racing to save Anglozia before the magic is forever eradicated. His own powers may be the only thing between the good people and their enemy. In Anglozia, Elistra and Tor plead with King Bravador to confine the Awakened Ones so that they are unable to wield any magic. Not knowing who is behind the plans of the Awakened Ones they are fearful that a traitor may be in their midst. Will Tobias reach Anglozia in time? Who is the traitor in the King’s court? Will Elistra’s memory be restored? Mankind and the future of magic are in jeopardy.

You may want to read the other books in the Battle For Magic series – Hand of Fire (Book 1), Daggerfell (Book 2), and Awakened (Book 3).