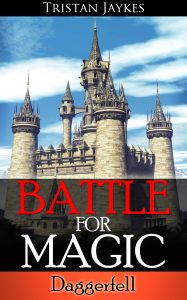 Daggerfell (Book 2) – Tobias has left his home city of Tratfort behind. The adventure he seeks is to be found in the neighboring city of Daggerfell where the Awakened Ones have cleansed the population of the magical ability they were born with. Once a great city filled with magic-wielding humans, Daggerfell has become a city of paranoid, magic-fearing citizens hell-bent on burning magic-wielders at the stake. All that they once knew and loved, gone, wiped from their minds by the Awakened Ones whose ultimate goal is to cleanse the world of magic – save for that which they possess. Tobias and his companions Elistra – a fiery, hot-tempered warrior and Gargan of the fierce magicless ones, must travel through the Endless Forest to face those who would rob humanity of magic and ultimately – freedom. Tobias must now prove to himself that he is worthy of the adventure he has sought for so long. Elistra, battle-rusty since the Wolven war two years earlier, fights a battle on two fronts. Her heart belongs to Tobias, but will he return her affections? Either way, she will stand by his side. With Gargan, the fierce warrior from the clans of the magicless ones in the Blackmaw Mountains at their side, they form a fearsome trio of magical skill, swordsmanship and most of all – a hunger to fight for a worthy cause. Their journey will bring them face to face with Tor, a charming Elven leader. If humanity falls under the combined might of the renegade Awakened Ones, Tor knows the Elves will be next. Together they face the might of the Awakened Ones holding Daggerfell under their treacherous spell. Many battles are looming, but their ultimate goal – to free Daggerfell from the Awakened Ones – will require all their skill and guile if they are to succeed and live to tell the tale. Adventure looms as the battle for magic continues.

You may want to read the third book in the series – Battle For Magic: Awakened.  There are also books 1 and 4 for your enjoyment- (Book 1)-Hand of Fire and (Book 4)-The Power Within.

← The Battle for Magic: Hand of Fire
Battle For Magic: The Power Within →