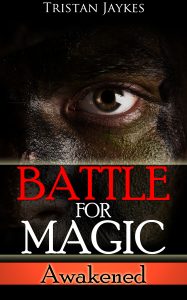 Awakened (Book 3) – In the ongoing Battle for Magic, Tobias finds himself in the hands of the evil Awakened Ones, possessors of the most powerful of magic. As he struggles to survive, he is increasingly aware of the evolution of his own magical prowess but faces doubt about his ability to overthrow Goldan, the Awakened Ones’ leader. Captive in the Awakened Ones’ hide-out, Tobias is guarded by Wolven, creatures who are able to shape-shift from wolves to werewolves and who would like nothing better than to shred Tobias with their vicious claws and fangs. Goldan, meanwhile, is intent on penetrating Tobias’ mind and taking control of his powers. Back in Daggerfell, Elistra is desperate to find Tobias, the man she loves. With her allies, Tor, the enigmatic leader of the elves and Gargan, the great warrior, she meets with Lord Ferozal to plan their course of action. For now they have the Awakened Ones on the run but the battle is far from over. Will Tobias find a way to escape from his Wolven jailers? Will the rag-tag group of friends have the fortitude to face the final battle? Is Tobias the man who will save the magic?

You may want to read the next book in the series – Battle For Magic: The Power Within.  There are also books 1 and 2 for your enjoyment- (Book 1)-Hand of Fire and (Book 2)-Daggerfell.

← Badass Buttocks: Coloring Book for Adults
The Battle for Magic: Hand of Fire →